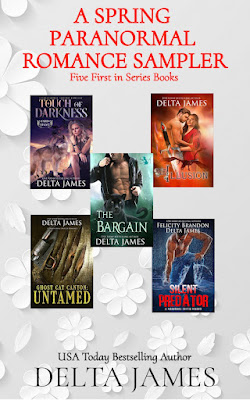 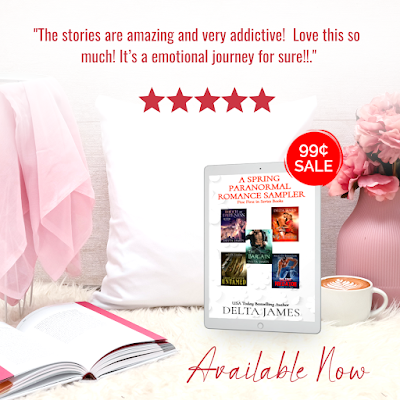 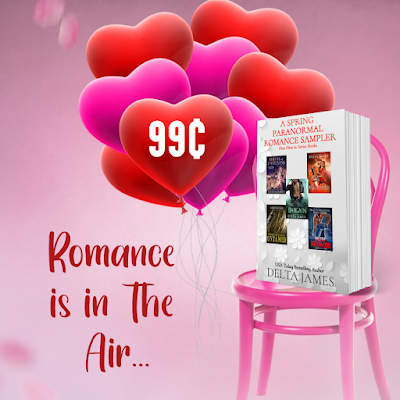 Powerful wolves. Evil dragons. Sneaky lions. Commanding jaguars. Protective sharks and even a magic sword. Discover your next book boyfriend in this unforgettable sampler of steamy and enthralling paranormal romances!

Find your next binge-worthy series. 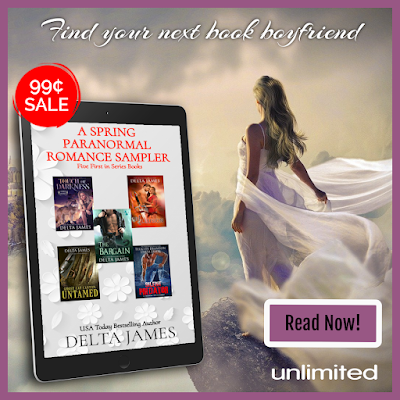 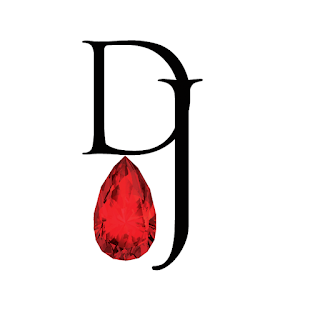 It’s Christmas Day! For those who celebrate, Merry Christmas. May you and your family have a blessed day. For those who don’t, I hope that you have a wonderful day on whatever Holiday you celebrate and every other day. I love learning about different cultures, traditions, and holidays. If you are up for sharing, please comment one of the three. I’d love to read them.

In honor of this wonderful time of the year, I’d like to share an anthology that somebody special to me is a part of. I’ve started reading it already. I’ve read a few of the short stories. They are very adorable so far! I can’t wait to read the rest!

Warm the cockles of your heart, and experience the true magic of Christmas with SWEET TREATS, a Limited Edition collection of short holiday romances!

If you love sweet romance then you’re in for a treat. From snowy ranches in the United States, to the small country towns in Australia, this collection will leave you sighing dreamily, and believing in the simple, and beautiful miracles of the festive season.

So sit back, relax, and be swept away in a flurry of snowflakes, red dust, and romance; and it’s all for a good cause! Proceeds of this collection will be donated to Beyond Blue, anxiety, depression and suicide prevention, to help those that need it most. Visit their website to learn more about this important organisation: http://www.beyondblue.org.au

The best part is that it’s currently $0.99 and on Kindle Unlimited!

Another present for you!

My name is Ava Jensen, and I’ve been hiding out for many years. If you find this message, you need to hide as well. They are after us all. It doesn’t matter if you shift or not, you are fair game. Use your wits, keep yourself hidden as best as you can. It doesn’t matter what race or religion you are, or even where you live. Everyone on Earth is a target. But, we won’t go down easy. Prepare to fight or die trying.

I hope you all have a wonderful day and rest of the year!

Book 1 in The Trident Trilogy 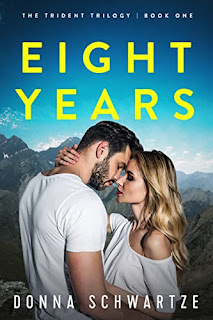 The Only Reason: Book 2 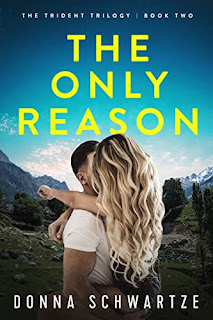 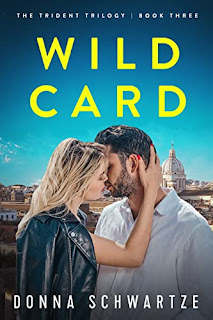 A steamy romantic suspense novel that can be read as a standalone or as part of The Trident Trilogy.

A single-minded lone-wolf. A burnt-out team leader. Will a joint operation heal their souls or end their lives?

Millie Marsh is obsessed with finding the truth. Still mourning her beloved father’s passing, the fierce CIA agent has poured all her energy into solving the mystery of her real mother’s identity. So when she’s saddled with a designated protector on a dangerous mission that could finally give her the answers she’s sought, the driven woman barely spares the handsome man a second glance.

Mason Davis doesn’t do relationships. But the jaded Navy SEAL’s latest assignment watching the back of a sweet, smart, and strong-willed operative has him ready to break his own rules. And undeterred by her apparent lack of interest, the relentless alpha male channels his strategic training into breaking down her defenses.

Focused on the payoff of her years-long quest, Millie desperately tries to ignore her attraction to her companion’s well-muscled frame and hidden tender heart. And Mason fears that as they zero in on a terrorist cell, the first woman to touch his soul will fall to enemy fire.

Will the duo’s red-hot chemistry scar them for life, or will they surrender to a happy ending?

If you like free-spirited heroines, smoldering tension, and edge-of-your-seat action, then you’ll adore this passionate page-turner 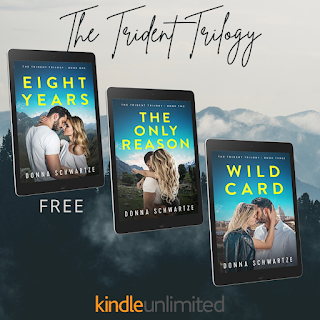 Donna Schwartze is the bestselling author of The Trident Trilogy (Eight Years, The Only Reason, and Wild Card), Truth or Tequila, and The Runaway Bride of Blitzen Bay. Be the first to know when a new book publishes in your favorite series by signing up for her email list at donnaschwartze.com.

Meet the Mountain Misfits: a band of bad ass bikers living life on their own terms deep in the mountains of Pennsylvania.

These are the stories of Gavin, Brooks, Tank & Red, Goob, Micah and the wild women who win their hearts.

There’s steam, violence, and twists and turns… get your tissues ready and make sure nobody is looking over your shoulder, because it’s going to be a wild ride!

This box set includes all six books in the Mountain Misfits MC series, as well as the Prequel Novella.

Meet the Misfits + Gavin and Sloane’s heartbreaking back stories

Gavin & Sloane’s adventure continues as she makes the tough choice between a life of misery in the medical field or changing her path to be with her one true love.

Brooding bad boy Brooks finally gets his chance to be with his first love Esther, who has spent her whole life trading her body for the safety of the patch.

Everyone’s favorite sassy bartender Olive finally gets her turn with two of the hottest men on the mountain. Will their fight for a HEA end in a fight for their lives?

Recovering addict, neglected by his family and trying to come to terms with his past, Goob finds out he’s got a son he never knew about. Will Azalea be just what he needs to go from single dad to a place where he’s finally loved for who he is?

Micah left the club years ago, but he’s back and looking for answers. Amber wants answers, too, and thinks she can find them swinging from the pole at the Misfit’s strip club. How could their fates be so twisted?

Sh*t hits the fan. That’s all you need to know about the last installment of this series.

6 Full length books + one novella… what are you waiting for?

NEXT DOOR TO A STAR by Krysten Lindsay Hager

Hadley Daniels is tired of feeling invisible.
After Hadley’s best friend moves away and she gets on the bad side of some girls at school, she goes to spend the summer with her grandparents in the Lake Michigan resort town of Grand Haven. Her next door neighbor is none other than teen TV star Simone Hendrickson, who is everything Hadley longs to be—pretty, popular, and famous—and she’s thrilled when Simone treats her like a friend.
Being popular is a lot harder than it looks.
It’s fun and flattering when Simone includes her in her circle, though Hadley is puzzled about why her new friend refuses to discuss her former Hollywood life. Caught up with Simone, Hadley finds herself ignoring her quiet, steadfast friend, Charlotte.
To make things even more complicated, along comes Nick Jenkins…
He’s sweet, good-looking, and Hadley can be herself around him without all the fake drama. However, the mean girls have other ideas and they fill Nick’s head with lies about Hadley, sending him running back to his ex-girlfriend and leaving Hadley heartbroken. So when her parents decide to relocate to Grand Haven, Hadley hopes things will change when school starts…only to be disappointed once again.
Cliques. Back-stabbing. Love gone bad. Is this really what it’s like to live… Next Door To A Star?

The school year should end right after spring break, because all anyone can focus on is summer vacation. You can’t learn anything new, because all you can think about is all the fun stuff you’re going to do once you don’t have to get up at the butt crack of dawn. Summer always seems full of possibilities.
Nothing exciting ever happens during the school year, but maybe, during summer vacation, you could run into a hot celebrity and he’d decide to put you in his next music video. Okay, it wasn’t like I knew anybody that happened to, but my grandparents did live next door to a former TV star, Simone Hendrickson, and Simone was discovered in an ice cream parlor one summer. Of course, she lived in L.A. at the time and was already doing plays and commercials, so the guy who discovered her had already seen her perform. But hey, it was summer, she got discovered, and that was all that mattered.
Amazing stuff didn’t happen to me. You know what happened to me last summer? I stepped on a bee and had to go to the emergency room. They’re not going to make an E! True Hollywood Story out of my life. I didn’t go on exotic vacations—like today, I was being dragged along with my parents to my cousin’s graduation party. Most people waited until at least the end of May before having a grad party, but Charisma was having hers early because she was leaving on a trip to Spain. I was dreading this party because I didn’t want to listen to everybody talk about how smart and talented Charisma was—making me feel like a blob in comparison—but my mom RSVP’d even though I said I’d rather die than go. My death threats meant nothing. But still, for some strange reason, I had a feeling this summer was going to be different.
Bio: Krysten Lindsay Hager writes about friendship, self-esteem, fitting in, frenemies, crushes, fame, first loves, and values. She is the author of True Colors, Best Friends…Forever?, Next Door to a Star, Landry in Like, and Competing with the Star (The Star Series: Book 2), Dating the It Guy, Can Dreams Come True, and In Over Her Head: Lights, Camera, Anxiety.
​Krysten’s work has been featured in USA Today, The Flint Journal, the Grand Haven Tribune, the Beavercreek Current, the Bellbrook Times, Springfield News-Sun, Grand Blanc View, Dayton Daily News and on Living Dayton. She received her master’s degree from the University of Michigan-Flint.

New addition to the desk crew. The rose isn’t new. I just realized I haven’t had it in other photos.
I turn 36 tomorrow. 😂
August 19th, 2050
First piece of birthday mail! 🥰🥰🥰🥰🥰
Birthday and other news!!!!
August BOTM came in! One of these beauties was free in honor of my birthday!!!! @bookofthemonth
When the corpse of an unidentified species is found in the woods near Pine Haven, New Jersey along with a human female, anthropologist Edie Campbell is called in by local law enforcement and the medical examiner to help identify the strange humanoid male. The discovery of a heretofore unknown species is thrilling for Edie, up until she realizes the creature recently mated with the human female.
For two generations, the L’quangats have used their superior firepower and strength to subdue humans and force them to live under alien rule.
I’m excited to dive into these!
On my reading agenda for the week! Don’t they all look so pretty???? @thesidekick_ig @caranorth_author @mk_mancos_author @velarothauthor @heather.frost.author @janetevanovich
★✩★ NOW IN KINDLE UNLIMITED ★✩★
So today didn’t go as planned. I was planning on reading the four Heartstopper books. I did manage to read half of one. So there’s that. I had a truly lazy day that I think I needed so I regret nothing. I can still read them tomorrow if time permits after meetings and task list!
I hope everybody has a wonderful Sunday! I plan to have a very relaxing me day! Part of which includes reading these beauties. I’m excited! I’ll be posting more on Monday!!!! Blessed be! #starsbooksandtea
★✩★ PREORDER ALERT ★✩★
★✩★ NEW RELEASE ★✩★
★✩★ NEW RELEASE ★✩★
★✩★ AUDIO SALE! ★✩★
★✩★ PREORDER ALERT ★✩★
Loading Comments...
%d bloggers like this: