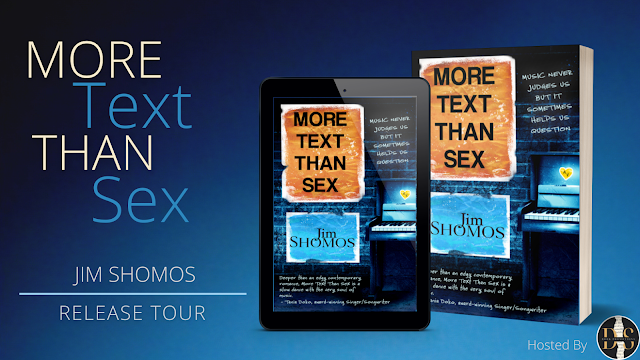 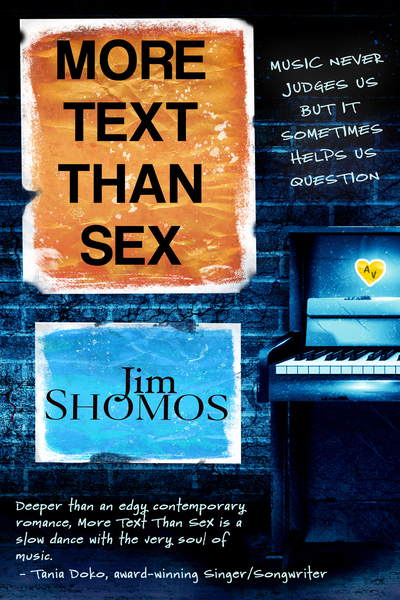 Deeper than an edgy contemporary romance, More Text Than Sex is a slow dance with the very soul of music. Tania Doko, award-winning singer/songwriter.

What a treat to dive into this insatiable story. Jim Shomos is a literary rock star! Marcelle, Singer/Songwriter

Music never judges us but it sometimes helps us question.

When Robbie is delegated onto Annie and Cat’s project to run a public songwriting contest, he’s convinced he’ll connect romantically with Annie, a single mother on the verge of relaunching her singing career. Annie is furious, and Cat terrifies Robbie.

Yet the professional and relationship mayhem at Merger Music runs deeper than the contest chaos.

Annie’s ex-lover, and still legally her manager, reappears after nine years and demands joint custody of their eight-year-old son. Cat’s volunteer work is financially and emotionally draining. How much can her heart bleed for others before someone bleeds for her?

Robbie’s going to be the hottest manager of rock stars in Australia if he can just navigate through a negative minefield: his family. And their CEO’s weakness for starlets creates a scandal that threatens to destroy everything they’re all working for.

Can you find your true self, let alone love, in a business built on sex, drugs, and rock ‘n’ lies?

His first novel published in 2020, Up Here, began life as a screenplay and was shortlisted in the top-5 of the Australian Writers’ Guild’s ‘Romantic-comedy competition’ alongside international bestseller, The Rosie Project.

He has collected nominations and awards in Cannes, from Film Victoria and the Australian Writers’ Guild.