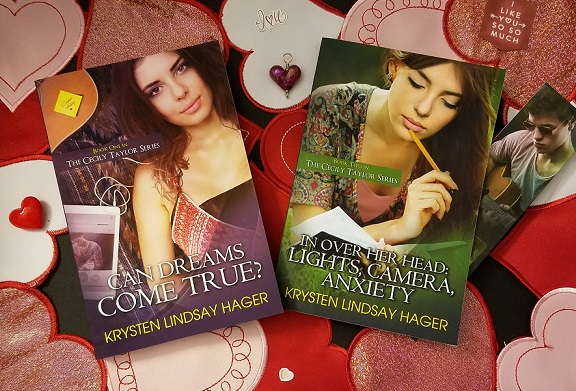 
Book One: Can Dreams Come True? By Krysten Lindsay Hager


Synopsis: Cecily has always had a huge crush on singer Andrew Holiday and she wants to be an actress, so she tags along when her friend auditions for his new video. However, the director isn’t looking for an actress, but rather the girl next door—and so is Andrew. Cecily gets a part in the video and all of Andrew’s attention on the set. Her friend begins to see red and Cecily’s boyfriend is seeing green—as in major jealousy. A misunderstanding leaves Cecily and her boyfriend on the outs and Andrew hopes to pick up the pieces as he’s looking for someone more stable in his life than the models he’s dated. Soon Cecily begins to realize Andrew understands her more than her small-town boyfriend—but can her perfect love match really be her favorite rock star? 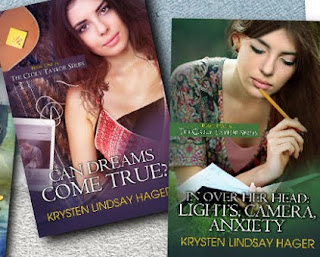 Book Two: In Over Her Head: Lights, Camera, Anxiety


Synopsis: Cecily wants a big life, but can she handle it?
Cecily feels like she has it all: great best friends, the beginnings of a career as a model/actress, and she’s dating her favorite singer, Andrew Holiday. Then Cecily’s best friend Lila begins to ditch her every time Lila’s boyfriend calls. Cecily feels lost, but she and Andrew begin connecting more and she’s never been in a relationship where she felt so understood. Andrew even begins to confide in her about his anxiety. Soon Cecily experiences her own anxiety on a magazine photo shoot, but she manages to impress the magazine staff. Just when it seems like all her dreams are coming true, everything comes crashing down when a photo of Andrew with another girl appears online. He swears nothing happened, but Cecily is crushed. She feels like she’s lost two of the people closest to her.
Was her perfect relationship real or was she in over her head?


“What do you watch—besides mystery shows that were canceled almost two decades ago about old ladies who solve mysteries?” Andrew asked.
“I like those cutesy TV movies. My favorite storyline is the big city girl who winds up in small town, finds love with an unlikely match.”
“My mom watches those. There’s always some girl who has given up because her last relationship was terrible or she’s a workaholic with big city ways. She meets some, like, sheepherder or Christmas tree farmer, he saves her. The end.”
“I seriously think I saw that one,” I said. He laughed.  “And there’s a kid who tries to show her the true meaning of Christmas. She also needs to tell a co-worker for no good reason why she hates Christmas,” I said.
“Oh yeah, she has to hate Christmas and then learn the true meaning of it, which always upset my grandpa because they never get into the religious side of it—oh, my grandpa’s a preacher—not the one who’s been married a ton—my other grandpa.”
I almost said, “I know,” but managed to stop from revealing I had watched his bio at least a million times. I’d be mortified if he ever found that out. “Don’t forget that all cars must break down in small towns where they don’t like big city values,” I said.
“Okay, don’t laugh, but that scenario is super close to a plotline in a movie my manager wanted me to do,” he said. “But I passed on it since I’m not looking to act right now.”
It was at that moment I realized exactly how different our lives were: I was talking about the movies I watch to escape, and he was being recruited to act in them.


Excerpt 2:
“Must be nice to have a hot pop star text you. Do you think he will contact you again?” Lila asked.
If he doesn’t, then I’ll probably never leave my room again. “I hope he does. I’d be seriously bummed if I—” Get phone dumped, get blocked online, see he’s dating someone else. “Don’t hear from him again,” I said.
“Does anyone else know he was the reason Zach got so mad at you when he walked in on Andrew trying to kiss you at the video premiere?”
“No, Zach didn’t tell anyone. I feel like it’d be weird if I told people that’s what happened. Like they wouldn’t believe me and think I was making it up to get attention,” I said.
“Yeah, I already heard a few people saying stuff.”
My stomach dropped. “Like what?”
“Huh? Oh…nothing major.” She gripped the steering wheel. “It’s impossible to find a spot on the street on a weekend.” I pressed her again, and she shrugged. “There’s a couple comments on his social media pages.”
Pulling out my phone, I went to the video’s link online and the first comment that came up was:
NoOneAndrewFan: Why did they pick HER out of all the girls in the world?
CaliGirlTwo: They couldn’t find any better than that chick?
Holidate008: She’s like if the word “plain,” was a person.
MusicIsLife: I think the point is that she’s not supposed to be hot, you guys
Holidate008: I think she’s supposed to be the opposite of that other girl in the video.
CaliGirlTwo: Obviously Andrew has a jealous girlfriend and told him to find blah girls to be in his video.
SleepAllDayz: I bet Andrew’s managers don’t want his fans to be jealous of any of the girls they cast in his videos. Mission accomplished.
Meghynn: Seriously, I’ve seen cuter girls walking down my street and I live out in the sticks.
KellyKellz: I bet the other actress said they couldn’t cast another hot girl.
Meghynn: Andrew obviously didn’t do the casting for this one.
Holidateforever: Wow! Seems like no one has anything nice to say, all you guys want to do is trash people. if you don’t like what Andrew’s doing in his video… then bye!
TeenaRoger: Guys, Andrew would hate all these negative vibes! If you don’t have anything good to say about his work then don’t follow his page, don’t listen to his music, and DON’T bother commenting.
Holidateforever: I think she’s pretty. Jealousy isn’t cute, you guys.
“Oh crap. I didn’t even think to look at the comments before now. I guess it was so surreal to think I was actually in a music video that it didn’t even occur to me to go on and see what people were saying,” I said as my face burned with embarrassment. “Has everyone at school seen these?”
“Don’t worry about it. People suck and if it makes you feel any better, a lot of people at school aren’t even talking about it because they don’t want you to get all stuck up,” she said.
That was supposed to make me feel better?


Top 10 Things About Cecily Taylor Damone from In Over Her Head: Lights, Camera, Anxiety


10. Andrew Holiday is the rock star Cecily is a huge fan of and begin dating. She has watched his biography online so many times that even her dad can repeat some of the lines in it!
9. There are funny parts in the books where Cecily has to watch and make sure she doesn’t accidentally say, “I know,” when Andrew reveals something about himself and risk looking like a stalker.
8. Cecily is super obsessive about how her bookshelves are arranged. She arranges them by genre and the non-fiction books are organized by subject. She keeps the used books on a shelf of their own because she says she doesn’t know who touched them and doesn’t want them touching her clean books just in case they had been somewhere dirty. She might get that from me…ahem…
7. She likes to listen to music that sounds like someone wrote the song based on her own journal entries. Music impacts her moods, so she loves Andrew as a fan because his music speaks to her very soul.
6. She worried about meeting Andrew in case he didn’t live up to her dreams because in her mind she felt he understood her already because she could relate to his lyrics.
5. In the book we see that she’s close to her dad and can talk to him about her dating relationship a little more because he works to relate to her and not judge her. He offers guidance and shares when he’s worried out of his mind about her getting into modeling and acting and dating a celebrity.
4. Cecily is close to her maternal grandma who takes her to New York for her modeling job and her grandma winds up getting asked to model as well. I loved the idea of her grandma getting a chance to achieve a dream, too.
3. She’s a loyal friend, but she finds when she tells a friend the truth about the girl’s boyfriend that it doesn’t go over well. It almost costs her a friendship, but she stands firm because she believes a real friend doesn’t just tell you what you want to hear when it isn’t true and could hurt you long-term.
2. She deals with anxiety and it reveals itself the day of her big photo shoot at the magazine. She manages to get through it with some help and perspective from the other models.
1. Cecily is very intimidated by the bigger name models and the people at the magazine photo shoot, but she does her best and learns that what makes a person different can be the very thing that launches them to the next level. She worries she doesn’t have what the other models do, but sees that what she brings to the table sets her apart and makes her special.


Author Bio: Krysten Lindsay Hager writes about friendship, self-esteem, fitting in, frenemies, crushes, fame, first loves, and values. She is the author of True Colors, Best Friends…Forever?, Next Door to a Star,  Landry in Like, Competing with the Star, Dating the It Guy, and Can Dreams Come True. True Colors, won the Readers Favorite award for best preteen book and the Dayton Book Expo Bestseller Award for children/teens. Best Friends…Forever won the Readers’ Favorite Silver Medal. Competing with the Star is a Readers’ Favorite Book Award Finalist. Landry in Like is a Literary Classics Gold Medal recipient.
Krysten’s work has been featured in USA Today, The Flint Journal, the Grand Haven Tribune, the Beavercreek Current, the Bellbrook Times, Springfield News-Sun, Grand Blanc View, Dayton Daily News and on Living Dayton.